Wushan Copper Mine since 1990. With a layered approach water sand filling method, without the addition of cementitious material. In 2004, Wushan Copper Mine cooperated with Changsha Mine Institute to rebuild a cementation filling process system in the filling station of Wushan Village in the South Mine Belt. The cementing filling test was carried out in the south mine belt W4 and W5, and the filling concentration reached about 68%. . After according to "Wushan Copper Mine in the overall production capacity optimization," and the 2004 China Nonferrous Engineering and Research Institute to do, "Jiangxi Copper Company Limited Wushan Copper Mine Potential 2002 Nanchang Nonferrous Metallurgy Design and Research Institute made Design of the preliminary design of the expansion of technical transformation. The northern ore belt of Wushan Copper Mine adopts graded tailings cementation filling method.

In 2007, the infrastructure work of the cement filling station in the North Mine of Wushan Copper Mine was completed. In October of the same year, the E4 panel of the North Mine Belt was the first test panel for the sub-step and phase-by-step pass-through tests, along with the cross-filling process. The advancement of the surface cementing filling station has been through continuous production practice and scientific research. At present, the weight concentration of the slurry has reached 65% to 72%, and good results have been achieved. At the end of 2008, there were 15 panels in the North Belt of Wushan Copper Mine for cementation filling, and the yield capacity of the stope was greatly improved.

The cement filling and filling system of the North Mine is composed of ground facilities (plant equipment, instruments, etc.) and underground conveying pipelines. The layout of the cementing filling station is arranged in a single-stage manner, and the vertical silo, cement silo and feeding gauge are arranged from top to bottom. , metering devices, mixing equipment, pipelines, mining sites. The filling process is shown in Figure 1.

The control of the uniform tailing sand supply amount is controlled by the computer according to the tailing sand concentration and flow rate through the switch degree of the electric actuator. The graded tail sand passes through the é”²-type flowmeter and the nuclear radiation concentration meter, and the self-flow tail is separately measured. The amount of sand and the concentration of tailings are fed into the high-efficiency mixing tank.

The cemented filling cement material of Wushan Copper Mine is mainly bulk P. () 42.5 Portland cement, mainly relying on tank cars to transport cement through the DNl24 pipeline to the filling station 200 m. The cement silo and the cement are evenly fed by the LE250Ã—3000 double-tube screw feeder at the bottom of the cement silo, and the punching flowmeter is metered and then falls into the mixing tank. The double pipe screw feeder is controlled by the frequency converter according to the set sand amount.

The main raw materials for the preparation of slurry filling are graded tailings and cement, which are completed by a 45 kw motor dragging 100Ã—2 000 high-efficiency mixing tank equipment. The more fully stirred, the more uniform the slurry. If the agitation is not uniform, it will not only reduce the strength of the filling body, but also affect the smooth transportation of the filling slurry and even cause pipeline blockage accidents.

Cement is an important cementing material for cementation filling production, which directly affects the filling cost and filling quality, so its accuracy is particularly important. The North Mine Belt Cementing Station uses the DE10 sensor and the MT2106 converter-type punching plate flow meter to measure, and outputs a standard analog signal through the assembler in the converter, and enters the main control room corresponding to the actual flow rate of 0% to 100%. The punching flowmeter has a measuring range of 0 to 40 t/h and an accuracy of Â±1%.

The graded tailings with uniform sand silo pulping have the characteristics of high concentration, fast flow rate and many minerals. Currently the north mineralized belt cemented filling stations out of flow measurement by self-exploration, electromagnetic flowmeters previous design, but due to our mine tailings with high iron (9.8%), during the run flow fluctuations, the measurement is not accurate. After that, according to the characteristics of mine tailings, I made a custom-made é”²-type flowmeter. The main principle is to generate differential pressure through the é”²-shaped part, which is detected by the differential pressure transmitter, and the output current is proportional to the square root of the flow value. mADC. The æµé‡è®¡ type flowmeter has a measuring range of 0 to 160 m/h and an accuracy of 0.5. From the current operation effect, the flowmeter is stable and reliable in operation and accurate in measurement.

At present, the main instruments for measuring the liquid level (material) of the cement filling station in the North Mine are:

In the past, the vertical sand bin level was measured with a heavy hammer level gauge. However, since the heavy hammer gauge gauge belt needs to be frequently immersed in the tailings during operation, it is easy to cause corrosion and fracture of the steel strip, causing blockage of the steel strip and cone. The vertical sand bin is opened, and the P0CUS200 integrated ultrasonic level gauge is used after technical transformation. The effect is ideal.

The liquid level (material) is an important parameter of the filling process, which directly guides the production, provides great help to the production, and reduces the operation difficulty of the frontline employees.

The North Mine Belt Cementation Filling Station uses GE's DCS control system. The system requires that the tailings and cement with uniform pulping are continuously and evenly transported into the mixing tank according to a certain ratio. The slurry prepared after mixing is self-flowed to the underground through the DNl33 pipeline without differential force. Fill the underground stope.

The control system has better control functions, good man-machine interface, stable system operation, advanced instrument and control system, and the main parameters such as the ratio of various materials and the concentration of slurry are effectively controlled to ensure the mine. Stable operation of the filling production process can meet the needs of production.

Since the cement filling process was promoted and used in the northern ore belt of Wushan Copper Mine at the end of 2007, according to the practice mode, technical improvement has been continuously carried out, and the graded tailings pulping system, cement feeding system and tailings metering system have been improved. Therefore, the current flow, concentration, and metering system are stable and accurate, and the filling concentration reaches 65% to 72%, which satisfies the design requirements. However, as the process matures, the filling quality is required to be higher and higher, and the filling process needs to be improved.

3) The vertical sand silo pulping system has yet to be explored and improved to ensure the stability and continuity of the tailings feed.

Slurry pump is a broad pump a common concept, different geographical, habits, ultimately relates to the pump will be as. This entry describes the mud pump is the most of a pump, oil field drilling. The application of mud pump. In fact, the sewage pump, slurry pump and other non water pump and slurry pump also has a common name in. This entry is to the reader of the drilling mud pump.

Photo of our Slurry Pump: 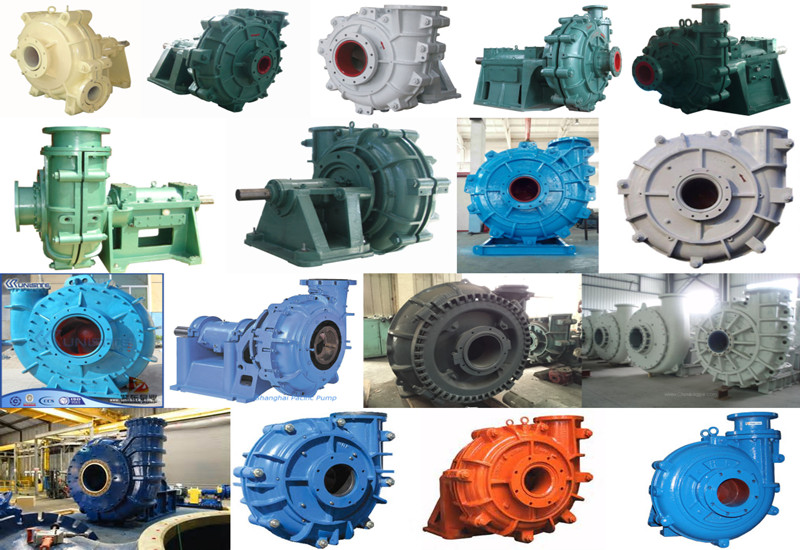 Mud pump, refers to the process of drilling in the drilling fluid to transport mud or water, such as washing fluid machinery. Mud pump is an important part of drilling equipment.

In the commonly used positive circulation drilling, it is the surface flushing medium - water, polymer mud or flushing fluid under pressure, through the high pressure hose, faucet and pipe column center hole sent straight drill bit at the bottom of the to to cool drill, cutting down the debris cleared and transported to the surface.

Common mud pump is a piston or plunger, by the power machine drives the crankshaft rotary pump crankshaft through the crosshead drive piston in the pump cylinder for reciprocating motion. Under the alternating action of the suction and the discharge valve, the purpose of the pressure feed and the circulating flushing liquid is realized.

In one cycle of the reciprocating motion of the piston, only one suction and drainage action is completed.

With the change of the diameter and depth of the hole, the displacement of the pump can be adjusted at any time. A gear box or a hydraulic motor is arranged in the mechanism of the pump to adjust the speed of the hydraulic motor to achieve the purpose of changing the displacement. In order to accurately grasp the changes in the pump pressure and displacement, the mud pump to install flow meter and pressure gauge, and at any time so that staff understand the drilling pump delivery \ turn, while the pressure changes discriminant hole condition is normal in order to prevent the occurrence of accidents in the hole.

5, self-priming ability, without bottom valve can be directly sucked liquid.

Before starting the mud pump, check the water inlet pipe, a water outlet pipe is blocked, from front to rear bearing grease filling, check the packing is full. Mud pump should be equipped with high-pressure water pump, will be greater than the pressure of slurry pump fresh water input to the leak proof packing, packing for protection, mud pump is not close flush pump. Otherwise, it will make rapid wear of seal parts. The gap between the Impeller and the guard board is reasonable, which has a great influence on the life of the mud pump. Clearance is unreasonable, pump running produce vibration and noise, over-current damage to parts quickly, and replacing the impeller, should pay attention to the gap to meet the requirements of the drawings, to adjust the clearance, the rear axle bearing body by the adjustment screw to. Mud pump allows the suction process is in the transport of water when the determination of the slurry should be taken into account the impact of mud on the suction capacity.